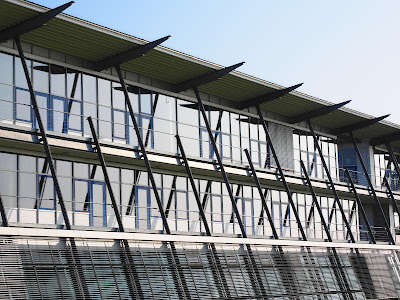 The main consumers of energy in cities are buildings, which use it for heating or cooling, and this is especially true for old structures built without taking into account modern energy efficiency requirements . Scientists at the Fraunhofer Institute propose to solve this problem with modular facades powered by solar panels, which will ensure the creation of a comfortable indoor climate.

Developed by German engineers, the system consists of individual photovoltaic units 125 cm wide and 30 cm deep, which can serve a room up to 24 m2. The module contains a solar panel that produces enough energy to run a small heat pump that generates 3 to 4 Wh of heat per 1 Wh of electricity consumed.

To heat the room, the system uses fan coil units that pump heat from the outside air into the room, and cooling is achieved through a reversible process. A decentralized ventilation system regulates this air exchange and allows the room to “breathe”. Modules of such a facade can also be connected to the mains, which will allow them to receive power in the event of a lack of solar energy.

According to the developers, the energy generating façade is suitable for retrofitting older buildings, especially those built between the 1950s and 1970s. The idea is that they can be used to bring existing buildings in line with modern environmental standards much faster, easier and more cost-effectively. 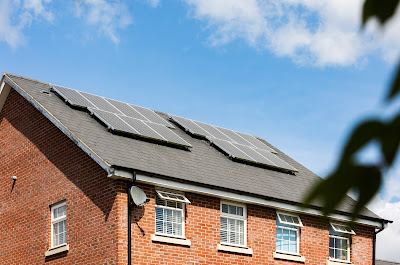 Interior of the test room for the heating and cooling system of the modular façade, Fraunhofer

Scientists argue that instead of renovating entire buildings, the original facades can be removed and replaced with new modules in a matter of hours. At the same time, during work, people from neighboring rooms do not even need to be moved. And later, as technology develops, the modules can be easily replaced with more efficient ones.

Experts estimate that up to 30% of the office buildings erected in Germany between 1950 and 1990 were built with technologies that perfectly match the new development. In total, these buildings consume about 3200 GWh of electricity each year, but with modular facades this figure will drop to 600 GWh.

Scientists still have a lot of work to do to optimize the system and create a finished commercial product, but they are confident that the modules can soon be used to improve the energy efficiency of both new and old buildings.

Read also: Solar panel for power transmission from space has been successfully tested by the US military