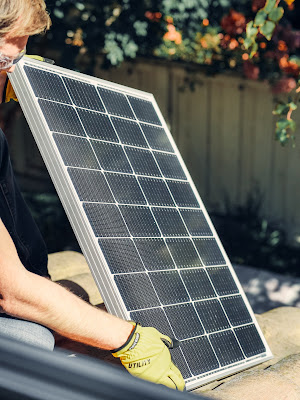 The United States Air Force Research Laboratory (AFRL) and the military-industrial company Northrop Grumman, as part of the Incremental Solar Power Demonstration and Research in Space (SSPIDR) project, conducted the first tests of the equipment.

In a test, American engineers successfully converted solar energy into radio waves using a photovoltaic sandwich tile. According to the researchers, this is a fundamental step towards the creation of a large-scale system for collecting solar energy in space and transferring it to Earth.

In 2018, AFRL awarded Northrop Grumman a contract worth over $ 100 million to develop key components for a prototype orbiting solar power plant . The space solar panel will be the main payload for the Arachne mission and will later serve as the building block for a large-scale operating system.

The presented solar module consists of two layers. The first layer is a panel of highly efficient solar cells that collect solar energy and provide power to the second layer, which, in turn, consists of elements that convert solar energy into radio frequency and form a beam.

“It was very exciting to be present at this important SSPIDR milestone and to see all the hard work that our partners at Northrop Grumman have done,” said Kyle Gleichmann, Chief Engineer at Arachne. “It is imperative that we demonstrate this technology in orbit as soon as possible.”

After successfully testing a separate solar tile for the Arachne project, engineers intend to build a one-square-meter block – a threshold that has not yet been achieved in other scientific work on converting solar energy into radio emission. The Arachne Experiment is expected to launch in 2025.

Recall that in March, scientists from the Pentagon successfully tested a small solar battery, which is a prototype of a system for collecting energy in space and sending it to Earth. An experimental photoelectric radio frequency antenna module (PRAM) is now on the X-37B orbiting drone, launched in May 2020.